This solver is a hybrid of icoFoam and stressedFoam. One grid-region is an incompressible fluid, the other is a solid. The pressure of the fluid is used to deform the solid.

This solver is only a demo. It should not be used to simulate the real world

Ah. And by the way: it does not work in parallel

At each time-step the following things are done:

Due to the two grids the standard Utilities for pre- and post-processing (FoamX and paraFoam) can't be used. Everything is setup with the help of a text-editor.

In order for blockMesh to work on the grid regions you've got to fool it:

To write the data of the two regions for ParaView just use foamToVTK:

An alternative approach is described in How to postprocess multiple regions.

The fluid mesh is deformed. The solid mesh has to be deformed while post-processing (with the Warp (vector) filter) 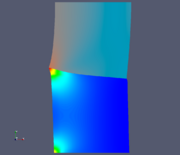 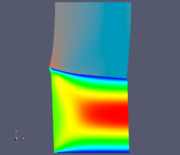 This case simulates flow in a channel. One wall of the channel is coupled to a deformable solid.

The two regions are:

In the beginning both of them are of equal size and square.

Due to the higher pressure at the inlet the solid gets deformed.

Both pictures are from the end of the simulation. For the solid the strain is shown. For the fluid the left picture the colors show the pressure, the right picture shows the velocity. 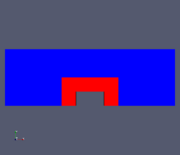 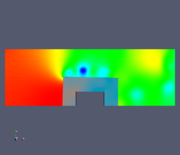 This case simulates the flow through a channel with an obstacle that consists of two parts: a solid, fixed part around which a deformable material is wrapped.

The two regions are shown in the picture on the left:

In certain parts of Austria this is also known as the Lentos-case.

These files are meant to be used with :

It's available at the following SVN repository folder: trunk/Breeder_1.5/solvers/other/IcoStructFoam @ sourceforge.net/openfoam-extend

Instructions on how to use it are given in the README file.

This port occurred as a request made here: icoStructFoam on OF-1.6ext

The source SVN repository code was gotten through the unofficial Git mirror indicated in the previous subsection and the port is made available in the branch of23 on this repository: IcoStructFoam repository in wyldckat@github