Difference between revisions of "Howto Use OpenFOAM with Kdevelop4"

KDevelop is a free, open source IDE (Integrated Development Environment) for MS Windows, Mac OS X, Linux, Solaris and FreeBSD. It is a feature-full, plugin extensible IDE for C/C++ and other programming languages. It is based on KDevPlatform, and the KDE and Qt libraries and is under development since 1998. - http://www.kdevelop.org/

Select the root directory of your project (for example: $WM_PROJECT_DIR/src/finiteVolume/) and leave the name empty. Click Next. 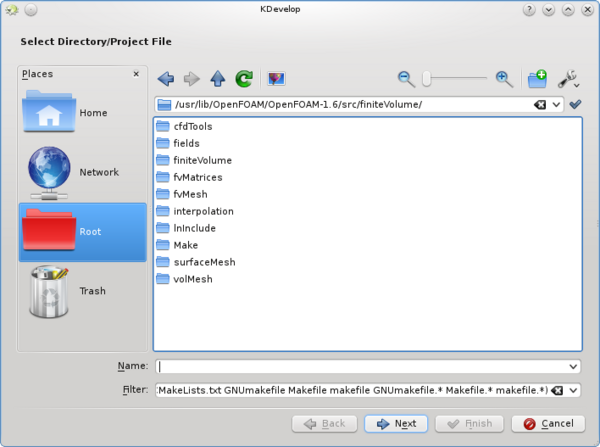 Type in a name of your project and select as Build System: Custom Makefile Project Manager. Click Finish.

If some header files cannot be found, as they are in different directories and the correct include path is missing, one can add "custom include paths" in order to have "Auto Completion" of your code or get Declarations and Definitions of classes. The custom include paths does NOT affect the compiler settings or the project in any way. The header files, which are not found are highlighted with a red under tilde. There are two possibilities to open the graphical dialog for customized include paths:

The custom include-path will be stored in a special file called ".kdev_include_paths". The "Storage directory" specifies the absolute storage location of this file within a source directory of your project. The custom path will be used for all files below that directory.

Specify your paths here. It might be useful to specify the "lnInclude" paths from each libso, you are using. 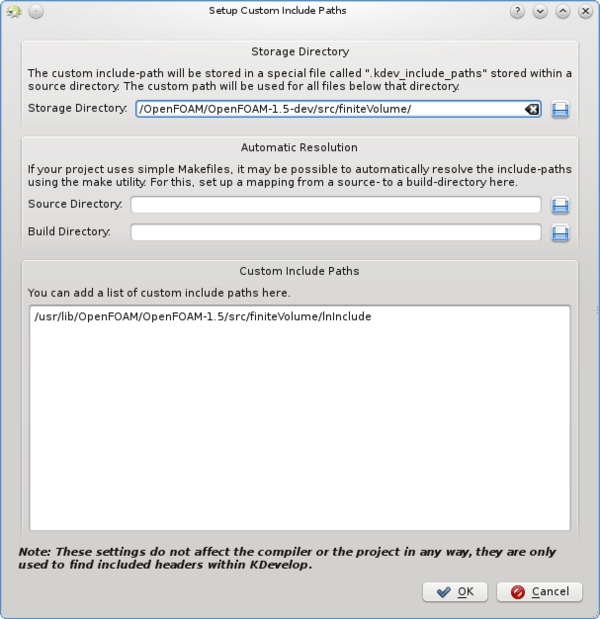