which is discretised at cell faces to

(unlike most other quantities which are discretised to cell centres), 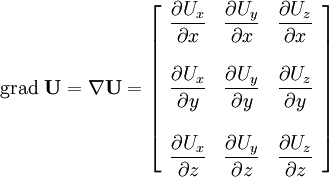