olaFlow is a free and open source project, committed to bringing the latest advances in the simulation of wave dynamics to the OpenFOAM and FOAM-extend communities.

olaFlow is a set of solvers and boundary conditions to generate and absorb water waves actively at the boundaries and to simulate their interaction with porous coastal structures.

olaFlow and olaDyMFlow solve two-phase incompressible flows within porous media by means of the VARANS (Volume-Averaged Reynolds-Averaged Navier-Stokes) equations. More information will be added, in the mean time check the references.

Currently all versions of OpenFOAM.org, OpenFOAM.com (+) and Foam-extend are supported.

olaFlow is the evolution of IHFOAM, a product developed in the frame of a Master and PhD Thesis at the Environmental Hydraulics Institute "IH Cantabria" of the University of Cantabria. The PhD thesis can be found and downloaded for free here:

If you want to reference the model in your publications it should be called olaFlow, and state that is an evolution of IHFOAM, referencing any of the following research papers, in which the IHFOAM implementation, validation and application details are published:

You can find IHFOAM in GitHub, and it can be downloaded in zip format.

For a more convenient download of the source code, run the following command:

If the git protocol is blocked in your network try either of the following commands:

Code updates can be downloaded in the future for the olaFlow folder as follows:

Recompilation is required to apply the changes.

Compilation has been automatized and needs to be performed only once. Since olaFlow does not require any dependencies, the source code can be downloaded and compiled anywhere on your computer, provided that you have a working OpenFOAM installation.

Simply run the following script from the olaFlow base folder:

You can also compile the boundary conditions or the solvers (olaFlow and olaDyMFlow) independently:

In this case be sure to select the correct folder for your preferred OpenFOAM/FOAM-extend (OF/FE) version. The currently supported versions have already been shown.

Porosity is introduced by setting an initial field. It can be done using the setFields utility, in a similar way to the VOF indicator function (alpha1, alpha.water). This field is called porosityIndex and it features the index of the porous zone to which each cell belongs. 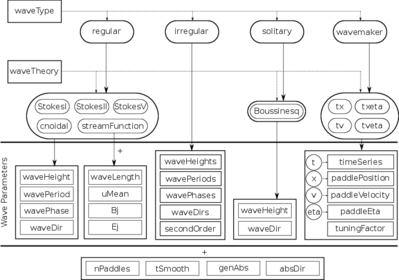 All the options are gathered in the figure on the right. The rectangles indicate the different parameters and the rounded boxes denote the options available. A complete showcase for the different wave theories can be found in the reference/waveDict folder.

Active wave absorption can be connected on the wave generation boundary so that waves incident to it flow out while still generating the target waves. If no other boundary is absorbing it sould be connected, to avoid a mean water level increase due to the mass imbalance between crests and troughs.

All the waves in olaFlow are generated in a similar way to the following implementation (Stokes I):

To absorb waves you have to set the following boundary condition for U. This time no data are read from a dictionary, so everything is set at the boundary condition level. The default values are shown, so the parameters that need no different value can be left out.

The olaFlow documentation and tutorials are included in the Github bundle.

Directory that includes a sample of waveDict file for each supported wave theory.

A set of tutorials, covering the use of olaFlow and the wave generation boundary conditions, is available. All the cases include a runCase and cleanCase. The first one runs all the steps needed to simulate the case and sampling/validation (when available). The second one resets the case to its initial state (i.e. with a very small size).

A simple wave flume (i.e. 2D channel) where waves are absorbed by a piston wavemaker.

A simple wave flume where waves and a current are generated simultaneously.

A simple wave flume where oblique waves are generated either by a multi-piston or a multi-flap wavemaker (10 individual paddles).

History of the changes in the source code. Slightly more detailed descriptions than in git: