The library waves2Foam is a toolbox used to generate and absorb free surface water waves. Currently the method applies the relaxation zone technique (active sponge layers) and a large range of wave theories are supported and the relaxation zones can take arbitrary shapes.

The library also comes with pre- and postprocessing utilities tailored for use for free surface flows within the fields of coastal, marine and maritime engineering.

The package is to be used in the modelling of free surface water waves. The package contains the following:

1.1 Supported Versions of OF

NB: The code is only compatible with OpenFoam version 1.5 up to and including svn-revision number 1950.

NB: The code is also compilable this the version 2.0 of OpenFoam, however, the solvers are not distributed along with the SVN-repository. Nevertheless, minor changes are needed in order to modify interFoam to get it to work; see below.

Please report on successful applications of the toolbox.

The toolbox has been tested successfully with the following releases of OpenFoam:

Throughout the code, pre-processor statements are used based on the argument OFVERSION, which is given as

which strips anything but the first three digits from $WM_PROJECT_VERSION (and in case it only contains 2, it is zero-padded). This also take into account that the scripting arguments are different on Linux and Darwin. Also note, that the OFVERSION is used to distinguish between options-files for the compilation, since the needed number of include-statements differs, as a result of a restructuring of the code as of OpenFoam version 2.2.

Furthermore, a pre-processor flag called EXTBRANCH is introduced in the more recent versions. This is introduced to take differences in class names between the two branches into account.

Whenever used please do make proper referencing to the following journal paper:

The paper has now been published.

If you have any ideas on how to improve this toolbox, or if you have developed pieces of code/functionalities, which you think would fit nicely into the framework, then please do not hesitate contacting me, e.g. via the cfd-online forum, where my user name is ngj.

There are two main threads on cfd-online.com, which are related to waves2Foam.

For announcements please consider (Note, that questions will generally not be answered here. It is a source of communication on developmemt/release topics):

For enquiries, discussion, etc, please use:

1.5 Also Used in These Works

Schematics of the code structure in the library

It is extremely simple to extend the number of implemented wave theories, as long as the needed algebraic expressions are available.

A set of different wave theories are implemented in waves2Foam. Besides stating the required wave type in the waveProperties.input file, each wave theory have different additional required information, such as wave height, wave period, water depth, etc. The detailed information are gather here:

The following wave theories are implemented to date:

Relaxation techniques generally cover the method of removing reflected or internally generated wave components adjacent to vertical boundaries. One method is currently fully functioning and the framework have been made ready for another type. Both of these are a part of the overall relaxation framework, which is implemented into relaxationZone. The latter is the one implemented into the solvers to add the relaxation functionalities.

The relaxation methods are:

The explicit relaxation techniques is performed before the momentum equation is solved in the following manner:

is a weigthing function. One particular method is implemented, however, everything is done with runTime-selection, so it should be rather easy to make another method and test it.

The numerical beach considers the addition of an artificial viscosity into the momentum equation.

A framework has been made ready with runTime selection, however, presently only a dummy-beach is implemented, which does not alter the artificial viscosity from the default value of 0.0. The numerical beach has direct access to the local distance function,

, in the relaxation zone, thus it ought to be straight forward to implement a given method.

Several relaxation weights are implemented into the current framework, where all of them can also be subject to a correction, which make the weight dependent on the local Courant number (see below).

The exponential weight is given as [1]

The free polynomial weight is given as [2]

. There is no default value.

The third order polynomial weight is given as [2]

. This shape is particularly derived to be used for relaxation zones, which are both generating and absorption waves.

The temporal correction is that of Sopheak Seng et al.[3], and is based on the local Courant number,

, where the corrected weight,

Relaxation shapes defines the shape and relaxation direction of the relaxation zone. The available shapes and their input format are

Generates a cylindrical relaxation zone, where the target solution is enforced along the outer radii.

Generates a semi-cylindrical relaxation zone, where the target solution is enforced along the outer radii. In addition the user needs to specify the direction of primary axis in the unit circle, zeroAngleDirection. The two angles, angleStart and angleEnd, must be in the interval

waveFoam is based on the original implementation of interFoam. Modifications are made to make it possible to use the relaxation zone framework with the solver.

3.2 waveFoam - How to Modify interFoam

For more recent versions of OpenFoam, the toolbox is not straightforward applicable, as the user (for the time being), needs to create waveFoam him-/herself from interFoam. Here are the necessary steps:

If the version number only contain 2 digits, then add a third digit being 0.

1. Copy the folder of solver interDyMFoam in the wave2Foam solver folder for version which you use, for example, for version 1.7.1:

2. Now modify the name of copied folder to waveDyMFoam (or whatever name you want... but it looks fine):

3. Clean the compiled solver and modify the name of C file:

4. Now we must follow the guidelines in section 3.2 (but with some difference, as for example, we don’t need modify createFields.H since it’s read from one level-up):

This tutorial section is an adaptation to wiki from:

This utility runs through every sub-dictionary (SD) in the dictionary waveProperties.input. A pointer to a derived class of setWaveProperties is generated for each SD; the pointer is based on the entry waveType. If the necessary input is available, the additional wave parameters are computed.

The derived data and the other needed input are written to the file waveProperties, which is subsequently used in the simulations.

As of revision 1982 the utility has become independent on the mesh, so unnecessary time for loading the computational mesh is avoided. This loading could potentially take a long time and on really big meshes prevent the execution on a serial machine.

A tool for visualising the relaxation fields in the computational domain. It also depicts the orientation of the relaxation zone. A tutorial is availabel.

This utility sets the initial condition in the computational domain. The entry initializationName in waveProperties defines which sub-dictionary is used for initialising the wave field.

NB! Note that the ramp-up factor is multiplied onto the expressions also during initialization of the computational domain. Hence, in order not to get a horizontal water surface and stagnant water, the parameter Tsoft should be given a value of 0.0; Tsoft is typically set to the wave period as default and is not required by most of the wave theories.

This utility is a specialisation of the OpenFoam/src/sampling/sampledSet/sampledSets in such a way that the sampled (scalar) quantity is integrated along a line defined in the file surfaceElevationDict. The utility is intended to by used as a post-processing utility, where the void ratio field is integrated along a vertical line, which yields the location of the free surface.

Since it is a specialisation of the native sample-utility, it runs both in serial and parallel modes. The two calls are as

An example of the input file is placed in applications/utilities/postProcessing/surfaceElevation. The rules are the same as for sampleDict, however, it only makes sense to sample the void ratio field, e.g. gamma or alpha1.

The utility only considers scalar fields.

The output file is placed in surfaceElevation/startTime/surfaceElevation.dat, and it contains all the sampled data for all sampled time steps. The formatting is as follows:

The value -1e15 is written to the output file under the following circumstances:

The utility can also be used as a functionObject. The tutorial waveFlume includes an example on how to use it.

In this mode a couple of additional time controls has been implemented into surfaceElevation. These are

This stalls the sampling of the interface location until the specified starting time is exceeded.

This value only has an effect, if it is strictly larger than 0.0. It modifies the output time for the sampling, so it is not control by neither a constant number of time steps nor the global output time. This allows for a sub-time step output of the surface elevation and thus saves disk space. This delta time does not feed back into the global setting of the time step, thus the output is only at intervals of approximately surfaceSampleDeltaT, where the accuracy obviously increases with decreasing deltaT / surfaceSampleDeltaT. So forth this ratio exceeds 1, one or more outputs is simply omitted.

For optimal uses of the surfaceSampleDeltaT, it is also recommended to specify the following

The utility does not compile with OF-1.5.

The file: waveProperties is to be placed in constant and must contain the following:

Furthermore, sub-dictionaries are needed for every boundary, which uses any of the boundary conditions:

and for all of the relaxationNames and the initializationName. The name of the sub-dictionaries are e.g.

Please note that if an boundary called inlet uses one or several of the boundary conditions, then it is allowed for instance to have a relaxation zone called inlet in order not to duplicate the input.

An example of a combined boundary and relaxation zone input is given here, where Stokes first order wave theory (Airy wave) is the input

An example of the surface elevation with waves from 3 directions onto a vertical structure.

NB: Some reflection does occur on the wall perpendicular to the wave outlet.

NB: In the simulation a portion of the wave propagates in the opposite direction of the actual wave propagation. It is considered to be due to the fact that the solitary wave theory does not fulfil the non-linear wave problem accurately enough, which is why a part of the wave energy is reflected on the wave itself. It has been tested to initialise with and without the analytical expression for the excess pressure, however, it does not make a difference. Experimental evidence of this behaviour is reported in [4]. 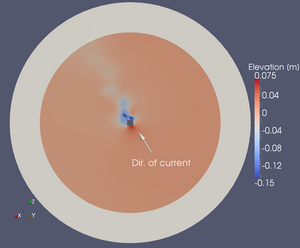 The surface elevation around a square pile in a constant and unidirectional current. The gray area is the relaxation zone.

NB: Generating waves in the computational domain in this tutorial will give bad results. This is a direct consequence of the huge variation in cells per wave length depending on the location in the domain and not the relaxation method! Particular attention should be given to circular domains with waves.

This work is still ongoing, hence for those waves missing a property-file, the pre-processing tool setWaveParameters will fail.

Besides the standard dependencies in OpenFoam, waves2Foam also depend on Gnu Scientific Library (GSL). This is needed for two reasons:

GSL can e.g. be downloaded using the following commands[8]

Please be aware that the location for GSL might differ between OS's, hence the include paths in the options-files could be wrong. If you have successfully installed GSL and the compilation complains over missing header files or libraries, this is the first place to look.

The toolbox is available through the OpenFoam-Extend SourceForge SVN. Check out the code in the following manner:

9 Modifications to the Source Code (History)