Difference between revisions of "SetSet"

setSet is a command-line utility that collects points, faces and cells in sets, based on different criteria, for later usage with different other utilities like subsetMesh. The defined sets are written in VTK format in the case folder (except if the option -noVTK is specified).

The syntax used by setSet is described below.

Execute batch commands for all timesteps

No synchronised selection across coupled patches

Apply only on the latest time available

Run the utility in parallel

Directories through which the data are distributed

Specify a mesh region by its NAME

Execute the command on the case directory DIR. If not provided, use the current directory

Skip the execution of the functionObjects

Display the help and exit

This utility is used in the following tutorial:

The structure of a set-command is

The sources available depend on the type of entities. An exhaust list of the sources is available within the documentation of topoSet.

Here are some examples provided in the official help:

Following is an example of the usage to fix an imported mesh that has small faults. 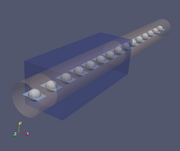 Running checkMesh on this geometry:

generates some warnings and errors, but most important, several sets: cellZone_1, cellZone_2, concaveFaces, edgeFaces, nearPoints, nonOrthoFaces, skewFaces, undedeterminedCells, warpedFaces, wrongOrientedFaces. The next step is to collect all the cells that contain any of the concave faces, incorrect edge faces, warped faces, wrong oriented faces, or cells with a very small determinant: