The written solver is called conjHeat, and is based on two other existing OpenFOAM solvers, namely rhoTurbFoam and laplacianFoam (still I have to mention this is a slightly modified version from the one written by Daniele Panara [Heat transfer with solid elements (conduction)]). The sources are accesible through the following link: file sources. The test case consists in a solid can (see Figure 1b), in which a hot fluid (700 K) is injected with 0.1m/s through a small area (green face in Figure 1). The exterior wall surface of the can is kept at a constant temperature of 300 K. 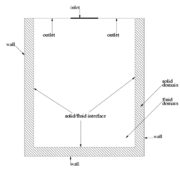 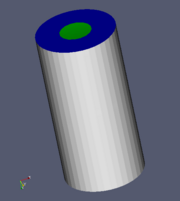 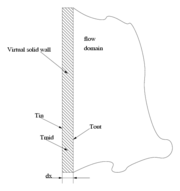 The sources of the complete approach solver: [conjHeat - solver]

The sources for the second approach (integrating a one dimensional heat equation on a virtual wall) can be downloaded here: [pseudoConjHeat - solver]

The case files for this solver: [pseudoConjHeat - case files]